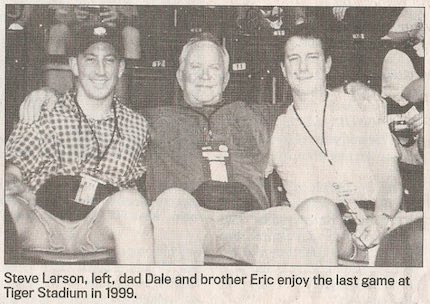 Guest blogger Steve Larson shares an essay that was originally published in the Detroit News on 04.02.06

The seeds of that love were sowed within the embrace of Tiger Stadium. Some of the happiest days of my youth were spent there with my dad and brother. Who can forget the magical summer of ‘76 when the Bird was the word? Or the roar of ’84 when the Tigers won the World Series right before our eyes? I’ll never forget catching a foul ball during the third inning and the euphoria we all felt as the final out dropped into Larry Herndon’s glove.

Last spring, I called my brother, Eric, to pitch an idea for a trip I always wanted to do with him and Dad. The plan called for the three of us, all scattered across the country (Dad in Florida and Eric in Chicago), to spend a long weekend reconnecting, reflecting and celebrating our love for baseball. Dad and I had never been to Yankee Stadium or Fenway and I knew how special it would be to experience the “House that Ruth Built” and the “Green Monster” with my dad and brother.

We found a weekend that worked, accommodating our busy schedules and coinciding with both the Yankees and Red Sox playing at home. The dates were set: Aug. 11-14. Being the planner, I carefully put together our travel itinerary, made hotel reservations and secured tickets to Yankee Stadium and Fenway.

As the date of our trip neared, the anticipation grew. My dad was particularly excited at the chance to spend a rare long weekend with his two sons. Each time we spoke that summer, he would tell me how much he was looking forward to our baseball trip.

The week before our departure, I spoke to my dad to finalize our plans to meet at the airport in Albany. It was a fairly short conversation, but we ended the call with each of us saying “I love you” as we always did.

Two days later, on Aug. 4, Dad was gone. Eric called me at work to tearfully tell me that he had died of a heart attack. I was stunned.

After talking during the next few hours, Eric and I decided to cancel our trip. There was no way we could go without Dad. Taking a “fun vacation” right after his death would not seem right.

Nonsense, said our stepmother and Dad’s wife of nearly 25 years, who tearfully implored us to go. Dad wouldn’t want it any other way, she argued.

The days leading up to our departure were filled with mixed emotions. How could we possibly enjoy ourselves knowing that Dad should be with us sharing this experience?

As the days unfolded that hot summer weekend, something amazing and wonderful happened.

A simple road trip from Albany to Cooperstown to New York City to Boston became a journey of reflection, reconnection and, most of all, celebration. Reflection on the life of a man whom we both love dearly. Reconnection of two boys who were now men separated by many miles and busy work and family lives. Celebration of Dad’s life and the game that brought us together those many days of our youth in Tiger Stadium.

I’ll never forget standing in the airport in Albany with Eric as we said goodbye to each other. The time we spent together was comforting and healing but now that we had to part ways, the reality of our loss seemed to overwhelm us.

Eric and I held each other and sobbed like little boys. For that moment, we were no longer men but just two boys who had just lost their dad and were coming to grips with their own mortality as fathers and husbands.

It seems only fitting now that the last baseball game the three of us attended together was on Sept. 27, 1999. That was the final game at Tiger Stadium.

It reminded us that nothing lasts forever and the old must make way for the new.

It was a strange and eerie feeling sitting in our old seats on the third base line as they were turning off the lights and asking the stragglers to leave.

As we walked down that tunnel for the last time and I looked back for one more glimpse, tears ran down my face.

Although I know we will never feel the warm embrace from Dad or Tiger Stadium again, the memories and the love will endure always.

One thought on “Baseball Trip Catches Spirit of Dad’s Love”