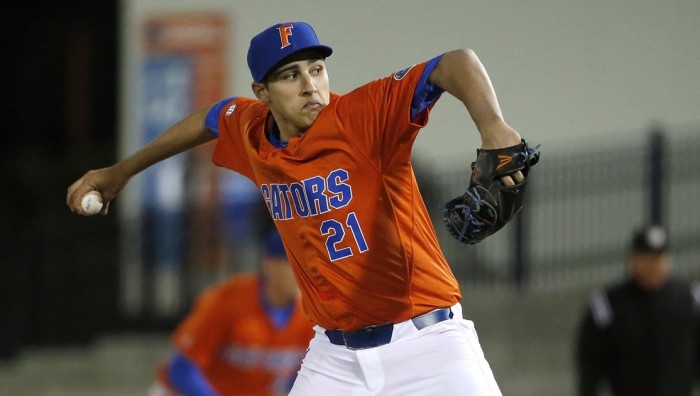 With the 18th pick in the first round of the 2017 MLB First Year Player Draft, the Detroit Tigers selected Alex Faedo, a right-handed pitched out of the University of Flordia.  Faedo is a 6’5”, 225lbs junior, who the Tigers had selected once before with a 40th round selection in 2014.

A Florida native, Faedo went to Braulio Alonso High School in Tampa (Same school that Jose Fernandez went to) where as a senior, was 6-2 and had a 0.58 ERA.  As mentioned he was drafted my Detroit, but opted to play at Florida.  During the 2017 NCAA season, Faedo was 7-2, with a 2.60 ERA, with 132 K’s in 107 1/3 innings pitched.  As a sophomore, Faedo pitched for the US Collegiate National Team.

Faedo was up there at the beginning of the season as a potential #1 pick, however minor arthroscopic knee surgery set him back to start.  Alex throws 90-94, with a slider and a changeup.

Faedo is currently pitching in the College World Series, with the Gators next game being played this Saturday at 7p on ESPN2 vs. TCU