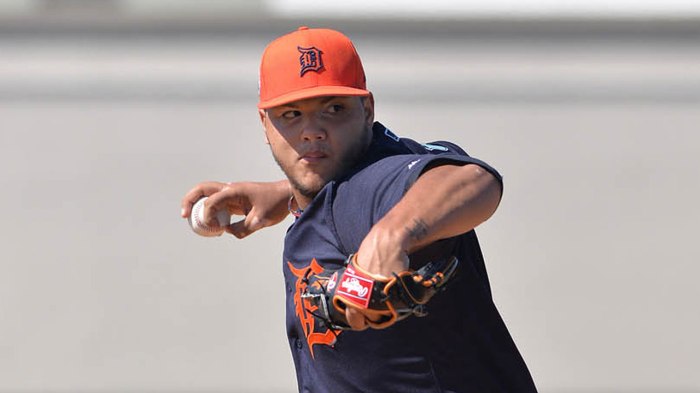 Well, if you watched yesterday’s dumpster fire of a game, you might have seen this coming…Bruce Rondon has been optioned to Triple-A Toledo after giving up 4 runs in the eight inning without getting an out.

This all started for Rondon in spring training after showing a noticeable drop in velocity and incurring a 7.36 ERA in 6 games pitched, where he gave up 6 earned, on 3 homers, with 6 walks, 10K’s, and a .259 average against and a 1.77 WHIP.   Concerns were eased a bit when he came in and pitched a scoreless inning in the first game of the season, but was hit hard on Opening Day in Detroit, giving up 3 earned, while recording just an out. Yesterday’s apperance sank his ship however as Rondon gave up another 3 and blowing a lead for an eventual loss in yesterday’s game.

Justin Wilson will repelace Rondon as the main bullpen arm in the setup role.

One thought on “Bruce Rondon Down, Joe Jimenez Gets The Call”