My annual post in taking a moment to remember the game is much bigger then what we watch during the season.

Opening Day, a day for happiness, a day that signifies that summer is on its way, a day that everyone is in first place, a day that every team still has a chance, a day of sadness for me. As much as I enjoy spending this day with my wife and friends hanging out at the ball park, it’s another opening day without my father. It’s now been over ten years since I lost my dad to cancer and not a day goes by that I don’t think about him, but this day is especially tough for me as we shared the bond of baseball together. As a matter of fact it’s so tough that I had to write this two weeks prior to opening day nine years ago.

See, Dad taught me the game and taught me well, he spent time playing catch with me, hitting grounders, pitching to me, playing backstop, playing strike out, you name it and we did it. He of course took me to my first Tigers’ game back in the early 80’s, which is what really got me hooked on the game. We’d spend many more opening days, Father’s Days, and summer days there together talking about the game. He was a catcher growing up, a position I never liked or truly became accustomed to, so he would share with me what the catcher was doing at that moment in the game. We’d take everything in while having probably some of the best conversations we had ever had, which could be about baseball but didn’t have to be.

We’d talk baseball on my way to school, when I’d go to work with him, or my favorite, around a campfire while listening to the game.

My dad would come to watch all my games in junior high, high school, summer ball, and even made a trip down to Alabama to see the opening of our college season, something I will never forget. He was always the father behind the backstop in the folding chair telling their kids to keep their elbow up, watch for the curve ball, etc.

Once I graduated from college my career path allowed me to share (along with a wonderful understanding wife) some our most memorable moments. These included the All-Star game held in Detroit, as well as unknowingly what would be our last game watched together, game 2 of the 2006 World Series (thank you, Nancy). I can’t recall the conversations that we had during these games, just that we had a great time together as we always did, no matter win or lose.

I some day hope to fill this emptiness I feel on opening day with my son and daughter, and if I can offer any advice it’s to spend as much time with the ones you love and never take that time for granted.

This is where my story ended up until 2011, but we’ve been fortunate and had a son (Beckett Richard) join us and if you read a previous years post and the updates you’ll know that we had him a month early the night before Opening Day. This was the first Opening Day I missed in something like 17 years, but was the happiest of them all as my son and I watched the game from the hospital room along side my wife and of course the Tigers won. Additionally we’ve been bless with a daughter (Addison, who got her name somewhat from a baseball player Addison Reed) and cannot wait for the two of them to get a bit older so we can spend time at the ball park together.

To further add on to the story… baseball will always cross generations and the picture below was from Beckett’s first Tiger game early in the 2013 season. By the way, that is a brick at Comerica and the first words my dad said when I was born (“I have a son”). 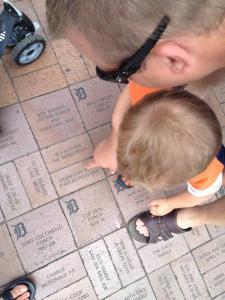 2 thoughts on “The Bond of Baseball”

A baseball publication that embraces the awkwardness of life and the 8-1 putout...Stay in Oakland! (cococrispafro@gmail.com)