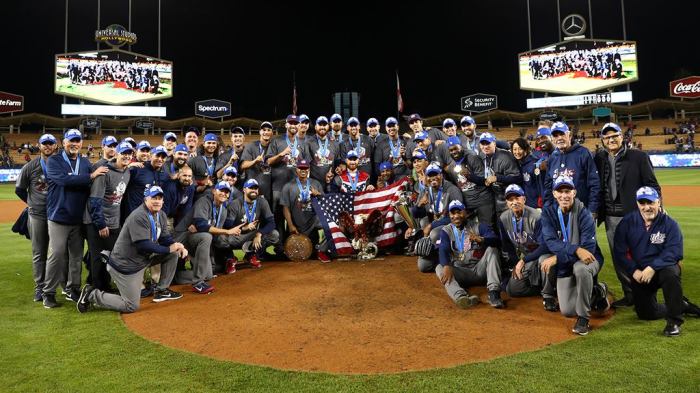 It’s taken four World Baseball Classics, but the US has finally won and did so in convincing fashion last night, with an 8-0 victory over runner-up from the 2013 Classic, Puerto Rico.  Marcus Stroman was dominant, Ian Kinsler was clutch in starting the scoring for the US with a two-run homer, and the defense and relief pitching held up nicely!

That said, outside of my baseball friends, no one is talking about the Classic what-so-ever.  Yes, the WBC is growing with over 1 million fans attending games this season (previous best was 800k in 2009), but are we really seeing favorability towards the tournament in this country?  When you boil it down, it still seems like the major issue here in the US is two-fold.  First, the lack of star player participation I think is the biggest issue which leads to second, overall performance.  Maybe with the US winning, that changes things.  The one thing I don’t want to hear from people is that the players just don’t care with it being an exhibition.  Check the video out of the US not caring about winning…

I’m hoping the excitement shown by all the teams makes its way back in to the clubhouses, players talk about their experiences, and the lack injuries (except Salvador Perez), etc. continue to help this event grow as there were some really great storylines from countries like Israel making a run to individual player stories such as Freddie Freeman and Team Canada.

For me, this was by far the most exciting Classic to date and not because the US won, although that didn’t hurt!  Let’s hope we see even more stars coming out to represent in 2020!!

By the way, I can watch this Adam Jones catch over and over…

Can you imagine if this would have been the USA’s lineup and roation???
C – Buster Posey
1B – Paul Goldschmidt
2B – Ian Kinsler (or Brian Dozier, Dustin Pedroia, etc.)
3B – Kris Bryant (or Nolan Arenado)
SS – Corey Seager
OF – Mike Trout
OF – Mookie Betts
OF – Bryce Harper
SP – Clayton Kershaw
SP – Madison Bumgarner
SP – Max Scherzer
SP – Chris Sale
And on, and on, and on…

2 thoughts on “Finally…The USA Wins A World Baseball Classic, But Does Anyone Care?”