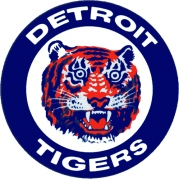 Well, the 2016 season is a wrap and we’re in to awards and hot stove season.  Before we get to the hot stove, lets look at some fun facts for a few of the Tigers this season…