One of my favorite baseball card releases of the season had come out recently with the Topps Company producing the long running (since 1989) Bowman.  Bowman is known to most as “The Home Of The Rookie Card” as the main focus is rookies, however that’s changed a bit with qualifications being put in place for what rookie card really is.  Bowman should really be known as “The Home Of The Players First Card” since most don’t qualify.  Regardless, I consider myself a prospector and this along with the November/December released of Bowman Draft is right up my alley.  Boxes are both retail and hobby, meaning that you can buy hobby at card shows, your local, dealer, etc and retail meaning you can buy at places like Target, Walmart, etc.  Hobby boxes have 240 cards and 1 auto, there are jumbo boxes which have 382 cards and 3 autos, and then you get get “blasters” retail blasters and packs as well.

This years release, like years past consists of 150 base cards including 29 rookie cards, a 150 card Prospect set (minor leaguers who have not made their MLB debut), 150 card Chrome Prospect set  (same set as above but in Chrome), a 35 card Chrome Prospect Autograph set, a ton of color variations, and then insert sets such as Bowman Scouts Top 100,  Family Tree, International Ink, Rookie Recollections, Sophomore Standouts, and Turn Two, all of which have autograph variations. 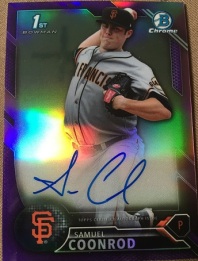 One thought on “Breaking Down Bowman Baseball”