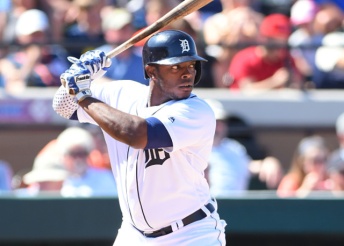 Chicago White Sox
Hot
Adam Eaton, OF – The offense is struggling quite a bit, with Eaton leading the team in hitting with a respectable .327 avg, however, also leading the team with a .787 OPS is a different story

Not
Carlos Santana, 1B – Santana does have a couple homers and is leading the team with 8 RBI, however his .154 avg and .594 OPS has lots of room for improvement

Detroit Tigers
Hot
J.D. Martinez, OF – Martinez has been there to cover for the struggles of “meat of the order” by hitting .370 with 3 doubles and 2 homers to go with his 1.010 OPS

Jarrod Saltalamacchia, C – Nick C or Ian Kinsler could be here as well, however for Salty to get the at bats he’s been getting since the injury to McCann, he’s been impressive.  Currently, Salty is leading the team in homers (5), RBI (14) and OPS (1.230) in just 30 at bats.  Thank you Miami!!

Jordan Zimmermann, SP – Zim throws against a tough Royals team tonight, however he is 2-0 currently with 13 scoreless innings, has 7 K’s, .167 avg against, and 1.00 WHIP

Not
Justin Upton, OF – If you have been watching the games, you know where to pitch Upton (up with a fastball) and it’s apparent that most of the league does with his .245 avg and whopping 22 strike outs in 53 at bats!!  Oh, Upton has just 2 RBI so far if the 22 K’s wasn’t enough…

Kansas City Royals
Hot
Ian Kennedy, SP – Tonight’s starter, Kennedy is 2-0 with a 0.66 ERA allowing a run against Houston and none against Minnesota.  Batters are hitting .156 against Kennedy and he averaged 0.73 in WHIP to go with 14 K’s

Chris Young, SP – Young is the only Royals starter currently struggling to start the season as he has given up 12 earned in 3 starts with a .333 average against and a 1.98 WHIP

Not
Miguel Sano, OF – The light tower power hasn’t shown up yet, but the strike outs have with Sano striking out 19 times in 47 at bats.  The .191 average and .607 OPS are also a good reason for Sano to be on this list

4 thoughts on “Strong Player Starts (and Not) From Around The League: American League Central”