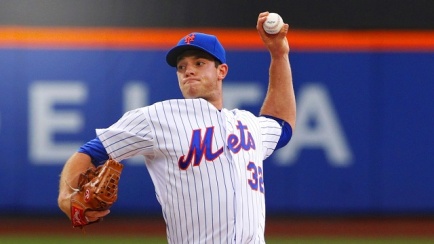 Spring training camps are opening up and we’re taking a look at a couple of young players for each team that I think will have a larger impact in 2016. We started with the American League East, moved to the AL Central, hit the AL West and swung it around today to the National League East. Keep on reading as we go division by division!

Matt Wisler, RHP – The 22-year old Wisler was a highly thought of prospect in the Padres organization before being part of the Craig Kimbrel trade.  Wisler entering his age 23 season already has 19 starts (20 games) under his belt with mixed results.  Regardless, he’s young, has much to learn, but will also be a building block as Atlanta tries to return to relevancy in the NL East over the next few years.  Wisler impressed in his debut, as he went 8 innings giving up 6 hits and an earned run against the Mets for his first career win.    He was then properly hit hard in his next start against Washington where he last just 4 innings.  His ERA remained a respectable 3.43 through his first 7 starts until he was shelled in for 12 combined runs his next two starts.  Wisler did finish on a strong note where he was 3-0 in his last 3 starts with a combined 1.19 ERA, .175 average against, and struck out 15 in 22.2 innings.  Where I hope to see growth this year is Wisler’s strike out ratio which was very low (5.9) compared to his minor league norms (around 8), and his walks per 9 will hopefully decrease, where he was a full walk above his minor league norm.  Being young, these numbers and results are to be expected will be interesting to see how much the 23-year old has grown

Manny Banuelos, LHP – Banuelos arrived in Atlanta as part of the David Carpenter trade.  The (at the time) 24-year old got his first taste of the Majors where he went 1-4 with a 5.13 ERA in 6 starts (7 games).  The main culprit was walks (almost 1 every 2 innings) and the home run ball (4 in 26 innings).  Once a top prospect with the Yankees, Banuelos has one main area of focus for growth, which is location.  He struck out a ton in the minors, but he walked a ton and that is only exposed further in the Majors.  I think we see a big step forward with ERA this year with the home run ball settling down; however it seems as if Banuelos success will be tied to his walk rate

Jose Fernandez, RHP – Can I pick a kid with a career 2.40 ERA?  Hell, it’s my blog, I’ll go with it!  Fernandez had a very successful rookie season at the age of 20 in 2013 with a 12-6 record and 2.19 ERA in 28 starts.  He threw well again in 2014 until an MRI revealed a torn UCL and set Fernandez up for Tommy John surgery.  Jose came made it back for 11 starts in 2015 to have another sub-3.00 ERA (2.92), but wasn’t necessarily himself.  It just came out that Miami will limit his innings this year, but if healthy and an offseason of throwing to get him comfortable post-surgery will do wonders where we see the low 2 ERA, sub 1 WHIP, big strike out numbers from Jose.

Christian Yelich, OF – Yelich just turned 24 in December and already has 1458 plate appearances under his belt.  Yelich battled injuries in 2015, however still posted his best batting average of his young career at .300, as well as the best OPS of his career at .728, and tied his career high in doubles with 30, despite 135 less plate appearances.  He’s never going to have a ton of power, but does look like he could potentially be a 20-20 guy with nice average.  Another positive sign that we could see further improvement from Yelich in 2016 is a falling strikeout rate from 24.2% on 2013 to 19.2% in 2015.  Additionally we’re seeing a higher extra base hit rate at 7.4% and a steady GB/FB rate at 1.74.  The only area that we saw recession with Yelich was in his walk rate which shrank from 10.6% of the time to 9%.

Michael Conforto, OF – The 22-year old spend just a season and half in the minors before being called up and never looking back.  He’s a good average guy with power developing, although it may develop faster than we thing with 23 extra base hits in 56 Major League games last season.  Conforto’s major issue to overcome looks to be his hitting against lefties as his smashed righties for a tune of a .275 average and .872 OPS, but struggled albeit based on a small sample size against lefties, where he hit .214 with a .481 OPS.  Regardless, I believe we see him hit lefties better, improve on his average, but see the power flatten out a bit as he almost triples his Major League experience this year.

Steven Matz, LHP – Easily could have placed Noah Syndergaard here, however Matz started out showing a ton of potential before the injury bug bit and this his year over year impact will be more that Noah’s.  Matz came out blazing in his first start in late June, picking up the win in 7.2 innings of work, allowing 2 runs (both homers).  That’s not all though, Matz set a Major League debut record by recording 4 RBI in a game, and dude’s a pitcher!  He went on to 2-hit the Dodgers in his next start, but after was announced that Matz would miss a month with lat strain.  He returned on September 6th, proceeded to pitch well and finished the regular season with a 4-0 record, 2.27 ERA, and averaged close a strikeout an inning (8.6 per 9).  Matz looks to be penciled in currently as the Mets number four or five starter and looks to do damage to the league with a full season ahead of him.

Aaron Nola, RHP – The 7th pick in the 2014 draft didn’t wait long to make his Major League debut, as he got the call on July 21st to face off against the Tampa Bay Rays.  Nola went on to lose his debut 1-0, but shut down the Rays for 6 innings, with his only blemish coming from a homer against Nate Karns.  Nola went on to make 13 total starts for the Phillies in ’15 where he was 6-2, with a 3.59 ERA, had a 1.197 WHIP and struck out 7.9 per 9.  Uncharacteristic for youngster in their first season, Nola showed very good control allowing just 2.2 walks per 9, but will have to tighten up the homer rate of 1.3 per 9

Maikel Franco, 3B – If Franco would have played a full season, I may have put J.P. Crawford here, but since he didn’t and since so many people knocked him after his cup of coffee in 2014, Franco is my guy.  Everybody knows the power is there for Franco, who took over 3B for Cody Asche in mid-May, but I really think the .280 batting average surprised a lot of folks.  Furthermore, I believe there are expectations of high strike out rates from Franco based on his power potential, but Minor League numbers say the opposite, and although his 15.5% K rate in 2015 may creep up in a full season, it won’t be Jay Bruce’ish.  A 11% extra base rate, the 7.8% walk rate, 30% line drive rate, and .297 batting average on balls in play (BAbip) all are positive signs for Franco moving in 2016.  This could be fun watching the left side of that infield develop over the next 3-4 years!

Trea Turner, SS – Turner got a taste of the Majors last with a late August call-up and didn’t show a whole lot with a .225 average and 12 strikeouts in 40 at bats, however he’s a top-20 baseball prospect for a reason.    That reason is of course his bat, where he had a .322 combined batting average in his two years in the minors.  The 13th pick in the 2014 draft showed an exceptional bat that he blew through stops at two different Double-A levels and Triple-A last season to make his debut.  For a 22-year old middle infielder, the power isn’t there as tallied just 62 extra bases in two full seasons, but who cares as Turner still had an overall .839 OPS, thanks to very high on-base numbers.  There’s no way Danny Espinosa or Stephen Drew hold him off for an entire season right?

Bryce Harper, OF – Yep, I took the cheap way out again, but hey…Harper just turned 23 in October!  Is it possible the reigning MVP who hit 42 homers, had a .330 average, and 118 runs scored can up his game further?  I think so, there is no doubt he’s going to continue to get the Barry Bonds treatment, but if guys can stay healthy and get on base ahead him, he’s a legit Triple Crown threat.  As I have said about Miguel Cabrera, we need to realize we are seeing greatness in both Mike Trout and Bryce Harper that comes along only once in a generation.

8 thoughts on “Youngsters Making An Impact In 2016; National League East”