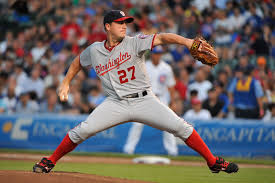 With the first major shot fired in the free agent market, the Tigers netted right handed starter Jordan Zimmermann, formerly of the Washington Nationals.  ESPN’s Keith Law had Zimmermann rated as the 17th best free agent available with Jim Bowden having Jordan as high as 6th.  In Bowden’s article on ESPN, pricing out the top free agents, he had Zimmerman at 6-years and $120mm.  Detroit is getting him at 5 years and $110mm.  Detroit will forfeit a draft pick however, as Zimmermann did turn down a qualifying offer from the Nationals.

This moved pretty quickly and my thoughts have ranged from shock of how much it cost to sign Zimmermann, to happiness once I learned that Johnny Cueto (a comparable pitcher) just rejected $120mm from Arizona.

Everything I’ve read and know about Zimmermann is that he is a top-notch competitor when it comes to the game.  The other thing that I keep reading is that he is the first player to have Tommy John surgery and crack the $100mm contract mark.

With that last statement, let’s focus on the risk first.  Jordan Zimmermann is 29-years old, had Tommy John in 2009 and has over 1000 innings now on that arm since.  I’m not a huge win/loss guy, so his 13-10 record isn’t concerning, however his ERA did creep up to 3.66 last seasons, which was the highest of his career since his second season (4.94), however that was just after his surgery.  Jordan’s velocity was down and as was his strike out rate, meaning more balls in play and again a WHIP that was his highest since just after his surgery at 1.205.

With the bad out the way, there is a lot of good if we consider last season an anomaly.  First, Jordan is a workhorse and threw 201.2 innings last year and averaged close to 200 innings per season over the last 5-years.  Second, even with more balls put in play, Zimmermann is control master as he’s averaging just 37 walks per season in the last 5- years and 156 k’s in the at timeframe.

At the end of the day, the money was a bit higher than I was hoping for, but knowing Detroit wouldn’t sign Greinke or Price; this is who I wanted the Tigers to target.  Well done Al!