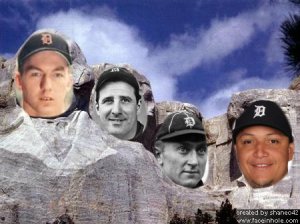 The MLB has been pushing the Franchise Four as well as the best living four baseball players (link to vote) recently where you can vote for your teams (or any teams) “four most influential players who best represent the history of each franchise”.  These players will be revealed at the All-Star game in Cincinnati on July 14th at 7:30.

When I wrote on the Pepper Baseball blog, I did something along these lines where I created my Mt. Rushmore of Tigers players, but figured that now this is officially a thing, that I’d write about it again and reconsider my choices.

My first take is that they got most of the players correct, although I’ll debate that Verlander probably should not be on the list as he can’t be the Tigers best pitcher of all-time, can he?

Right off the top, I’m taking JV and Tram out, leaving six choices for four spots.

Without a doubt Ty Cobb is on my list and I think Miguel Cabrera will be one of the top-5 right handed hitters of all time when his careers over.  This leaves me with Greenberg, Kaline, Crawford, and Gehringer, so let’s get to work.

Gehringer ranks second on the all-time Tigers list in runs (Cobb), third in hits (Cobb/Kaline), 2nd in doubles (Cobb), 4th in RBI (Cobb, Kaline, Heilmann), and eighth in batting average with 1900 or more at bats.

Crawford had never won an MVP, although he finished second in 1914, he does hold the career best for triples and although he didn’t hit a lot of homers in the dead ball era, he does sit 79th all-time in extra base hits.  Baseball-Reference rates Sam Crawford as the 12th best right fielder of all-time via their JAWS rating system.

Hank had won two MVP’s before the war and finished 8th in 1945, however with 44 homers and 127 RBI that season, you’d think he’d finish higher.  Greenberg was elected to the Hall of Fame in 1956 on his 10th try and ranks 15th on Baseball-Reference for First Basemen.

Given his shorten career, Greenberg still ranks in Tigers franchise history as 10th in runs scored, 12th in hits, 8th in doubles, 3rd in home runs, 6th in RBI, and 9th in batting average with 1900 or more at bats

So Kaline joins Cabrera and Cobb on my list and I am eliminating Crawford leaving a very tough decision between Gehringer and Greenberg.

At the end of the day, I choose Hank Greenberg based on his two MVP’d and war shortened career,, although I’d have very little argument if someone chose Gehringer instead.

By the way, here are Cobb’s and Cabrera’s career stats…

Do you agree/disagree and who would you have placed on this list instead???

3 thoughts on “The Detroit Tigers Franchise Four From My View”

The blog equivalent a foul ball to the face...Stay in Oakland! (cococrispafro@gmail.com)